This article is a short how-to about multi-module project setup with usage of the Gradle automation build tool.

Gradle promises to hit the sweet spot between Ant and Maven. It uses Ivy’s approach for dependency resolution. It allows for convention over configuration but also includes Ant tasks as first class citizens. It also wisely allows you to use existing Maven/Ivy repositories.

So why would one use yet another JVM build tool such as Gradle? The answer is simple: to avoid frustration involved by Ant or Maven.

I was fooling around with some fresh proof of concept and needed a build tool. I’m pretty familiar with Maven so created project from an artifact, and opened the build file, pom.xml for further tuning.
I had been using Grails with its own build system (similar to Gradle, btw) already for some time up then, so after quite a time without Maven, I looked on the pom.xml and found it to be really repulsive.

Once again I felt clearly: XML is not for humans.

After quick googling I found Gradle. It was still in beta (0.8 version) back then, but it’s configured with Groovy DSL and that’s what a human likes :)

In the time Ant can be met but among IT guerrillas, Maven is still on top and couple of others like for example Ivy conquer for the best position, Gradle smoothly went into its mature age. It’s now available in 1.3 version, released at 20th of November 2012. I’m glad to recommend it to anyone looking for relief from XML configured tools, or for anyone just looking for simple, elastic and powerful build tool.

Have I just referred myself for the 1st time? Achievement unlocked! ;)

Gradle as most build tools is run from a command line with parameters. The main parameter for Gradle is a ‘task name’, for example we can run a command: gradle build.
There is no ‘create project’ task, so the directory structure has to be created by hand. This isn’t a hassle though.
Java and groovy sub-folders aren’t always mandatory. They depend on what compile plugin is used.

the-app itself has no src sub-folder as its purpose is only to contain sub-projects and build configuration. If needed it could’ve been provided with own src though.

To glue modules we need to fill settings.gradle file under the-app directory with a single line of content specifying module names:

Now the gradle projects command can be executed to obtain such a result:

…so we know that Gradle noticed the modules. However gradle build command won’t run successful yet because build.gradle file is still empty.

As in Maven we can create separate build config file per each module. Let say we starting from DAO layer.
Thus we create a new file the-app/dao-layer/build.gradle with a line of basic build info (notice the new build.gradle was created under sub-project directory):

This single line of config for any of modules is enough to execute gradle build command under the-app directory with following result:

To use Groovy plugin slightly more configuration is needed:

At lines 3 to 6 Maven repositories are set. At line 9 dependency with groovy library version is specified. Of course plugin as ‘java’, ‘groovy’ and many more can be mixed each other.

One file to rule them all

Instead of creating many build.gradle config files, one per each module, we can use only the parent’s one and make it a bit more juicy. So let us move the the-app/dao-layer/build.gradle a level up to the-app/build-gradle and fill it with new statements to achieve full project configuration:

At the beginning simple variable langLevel is declared. It’s worth knowing that we can use almost any Groovy code inside build.gradle file, statements like for example if conditions, for/while loops, closures, switch-case, etc… Quite an advantage over inflexible XML, isn’t it?

Next the allProjects block. Any configuration placed in it will influence – what a surprise – all projects, so the parent itself and sub-projects (modules). Inside of the block we have the IDE (Intellij Idea) plugin applied which I wrote more about in previous article (look under “IDE Integration” heading). Enough to say that with this plugin applied here, command gradle idea will generate Idea’s project files with modules structure and dependencies. This works really well and plugins for other IDEs are available too.
Remaining two lines at this block define group and version for the project, similar as this is done by Maven.

After that subProjects block appears. It’s related to all modules but not the parent project. So here the Groovy language plugin is applied, as all modules are assumed to be written in Groovy.
Below source and target language level are set.
After that come references to standard Maven repositories.
At the end of the block dependencies to groovy version and test library – Spock framework.

Following blocks, project(‘:module-name’), are responsible for each module configuration. They may be omitted unless allProjects or subProjects configure what’s necessary for a specific module. In the example per module configuration goes as follow:

At the end in idea block is basic info for IDE plugin. Those are parameters corresponding to the Idea’s project general settings visible on the following screen shot. 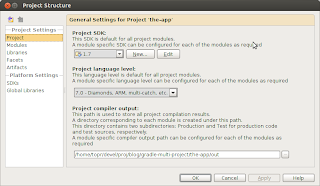 jdkName should match the IDE’s SDK name otherwise it has to be set manually under IDE on each Idea’s project files (re)generation with gradle idea command.

In the matter of simplicity – yes. That’s enough to automate modular application build with custom configuration per module. Not a rocket science, huh? Think about Maven’s XML. It would take more effort to setup the same and still achieve less expressible configuration quite far from user-friendly.

Check the online user guide for a lot of configuration possibilities or better download Gradle and see the sample projects.
As a tasty bait take a look for this short choice of available plugins: