This is the launch of the 1st blog in my life, so cheers and have a nice reading!

Couple of years ago I wasn’t a big fan of unit testing. It was obvious to me that well prepared unit tests are crucial though. I didn’t known why exactly crucial yet then. I just felt they are important. My disliking to write automation tests was mostly related to the effort necessary to prepare them. Also a spaghetti code was easily spotted in test sources.

Some goodies at hand

Now I know! Test are crucial to get a better design and a confidence. Confidence to improve without a hesitation. Moreover, now I have the tool to make test automation easy as Sunday morning… I’m talking about the Spock Framework. If you got here probably already know what the Spock is, so I won’t introduce it. Enough to say that Spock is an awesome unit testing tool which, thanks to Groovy AST Transformation, simplifies creation of tests greatly.

The point is, since a new major version of Groovy has been released (2.0), there is no matching version of Spock available yet.

Well, in a matter of fact there is such a version. It’s still under development though. It can be obtained from this Maven repository. We can of course use the Maven to build a project and run tests. But why not to go even more “groovy” way? XML is not for humans, is it? Lets use Gradle.

Update: at the end of the post is updated version of the build file.

As you can see the build.gradle file is almost self-explanatory. Groovy plugin is applied to compile groovy code. It needs groovy-all.jar – declared in version 2.0 at dependencies block just next to Spock in version 0.7. What’s most important, mentioned Maven repository URL is added at repositories block.

Gradle’s default project directory structure is similar to Maven’s one. Unfortunately there is no ‘create project’ task and you have to create it by hand. It’s not a big obstacle though. The structure you will create will more or less look as follows:

To build a project now you can type command gradle build or gradle test to only run tests.

You can test native Java code with Spock. Just add src/main/java directory and a following line to the build.gradle:

This way if you don’t want or just can’t deploy Groovy compiled stuff into your production JVM for any reason, still whole goodness of testing with Spock and Groovy is at your hand.

Just to show that it works, here you go with a basic example.

The test, uhm… I mean the Specification:

To run tests with Gradle simply execute command gradle test. Test reports can be found at <project root>/build/reports/tests/index.html and look kind a like this. 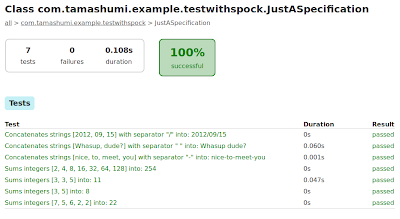 Please note that, thanks to @Unroll annotation, test is executed once per each parameters row in the ‘table’ at specification’s where: block. This isn’t a Java label, but a AST transformation magic.

I’ve added also Intellij Idea plugin for IDE project generation and some configuration for it (IDE’s JDK name). To generate Idea’s project files just run command: gradle idea There are available Eclipse and Netbeans plugins too, however I haven’t tested them. Idea’s one works well.

Idea itself has a light Gradle support built-in on its own. To not get confused: Gradle has plugin for Idea and Idea has plugin for Gradle. To get even more ‘pluginated’, there is also JetGradle plugin within Idea. However I haven’t found good reason for it’s existence – well, maybe excluding one. It shows dependency tree. There is a bug though – JetGradle work’s fine only for lang level 1.6. Strangely all the plugins together do not conflict each other. They even give complementary, quite useful tool set.

Jest to add something sweet this is how Specification looks when run with jUnit  runner under Intellij Idea (right mouse button on JustASpecification class or whole folder of specification extending classes and select “Run …”. You’ll see a nice view like this.

in the build.gradle file and create a directory src/main/webapp.

If you haven’t heard about Spock or Gradle before or just curious, check the following links:

The last thing left is to write the real production code you are about to test. No matter will it be Groovy or Java, I leave this to your need and invention. Of course, you are welcome to post a comments here. I’ll answer or even write some more posts about the subject.

Spock version 0.7 has been released, so the above build file doesn’t work anymore. It’s easy to fix it though. Just remove last dash and a word SNAPSHOT from Spock dependency declaration. Other important thing is that now spock-core depends on groovy-all-2.0.5, so to avoid dependency conflict groovy dependency should be changed from version 2.0.1 to 2.0.5.
Besides oss.sonata.org snapshots maven repository can be removed. No obstacles any more and the build file now looks as follows: