I’ve started doing Scrum in late 2008 (thanks to Piotr Burdyło). And though I’ve immediately seen benefits of practices like daily standups, sprint planning, reviews and retrospectives, I had a big problem with finding out how to deal with refactoring within this method.

Before Scrum, whenever I found a place in code that I thought should be done better, I’d put a TODO comment. I would return to these comments whenever I saved some time on what I was doing, or when I decided that it has already been too ugly for my standards. And since my standards are pretty tight, I’ve been  (and making others) refactoring quite often and it worked well for me.

When doing code review, I’d write TODOs, discuss them with the authors of the code, and make them do clean up as the top priority.

But what were my options in Scrum?

1. Don’t tell anybody, and just use your left over time to clean up the TODOs

This is against transparency, which Scrum is advocating, and against my moral backbone (no lying). And since you are evaluating tasks/features better and better, sooner or later you’ll have no left over time for TODOs anyway. Ergo: this won’t do.

These are not visible from the product owner point of view, so some Scrum Masters are strongly pushing against them.

Ok, so I had to choose the second option, and make my Scrum Master live with it. But then, another problem emerged: unless you put a cleaning task for every class that has TODOs inside, sooner or later you’ll end up with tasks like “Do all the TODOs in my Big-Ugly-Module”.

This will happen because doing TODOs may have very low priority, because people in a hurry don’t bother doing them, and because some people don’t write TODOs at all, rather thinking: “yeah, this is ugly, lets fix it, when we fix the rest of the module”.

So it seams that your code is predestined to go down the great spiral of (bio)degradation, until your team can’t stand it anymore and somebody asks for a Scrum task to clean up the mess.

Is there a solution to this? Is there a third way?

What if we can switch the direction the code quality goes in? What if our code can get better with time, instead of getting worse? That would be cool and it would solve our problem with TODOs in Scrum.

Leave every code you read in better shape than you found it.

Ha! That sounds like something everyone would sign under, and completely forget about a few minutes later, right? I mean, phrases like this sure look nice, but the real battlefield, the front-line, is a mean and messy place, right? You sit in your trench, trying to survive and keep the project alive, while bullets fly above your head. How can you try to make things better, when you couldn’t keep them clean in the first place? No way to do it, man, there is too little time, right?

Let me show you how to use this rule in practice, without any significant time burden.
Real case scenario

You are in the middle of writing an application, you take a task from the Scrum white-board. It’s a new feature. It says: “When importing orders, every shipping address should be verified. If it’s not in our shippable zone, it should be canceled (status change + send an email to the frontend application)”.

Ok, so you want to write a new acceptance test, for this feature. But first you need to know what to test, which part of the application is responsible for importing orders. You search the project structure, and you spot the OrderService interface. You nose tells you, that it should be somewhere there. You take a look.

Yeah, it’s there. The importOrders() method. You search for implementations, and as you expect, there is an OrderServiceImpl. 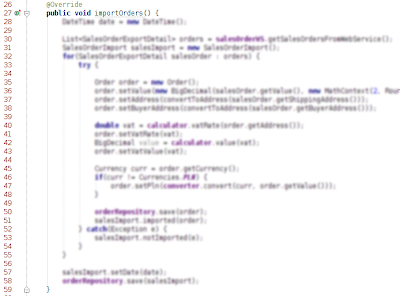 WTF is with this blur, you ask. It’s intentional. It’s how much you see during your first second of looking at the code. At the first second you, as a good writer, have already noticed two things:

What does the second thing mean? It means, that the author has noticed the first thing as well, so he decomposed the method into different blocks, by putting an empty line between them.

This is so natural, so popular, nobody thinks about it anymore. We put empty lines between different blocks of code, to help us read the code. When we read the code, we can skip such blocks, because we already know, what those blocks do.

We put together similar stuff, so we can put a name into our mind-map, that given block does something. Next, we can fast read and skip it consequently.

There are two big problems with such method:

So how about fixing it, while we read it? We have to read and understand it anyway. How about not keeping the names of blocks in our memory, but putting them into the code instead.
Comment every block of code

You are doing it anyway, but instead of saving the names/explanations in your head, save them in the code for a moment.

Put the comments without any indentation, so that you won’t forget to get rid of them, and they won’t mix with other comments in the code. Make those comments verbose, make them say everything that is important on this level of abstraction. You are a programmer, you probably write faster than you think, so there was no additional time spend on this action.

Now for the second step.

The goal is to compress all the information from inside the block and the comment into one-liner. That saves the time the reader needs to get the meaning of the code next time. It usually means, replacing the block with a method, with a name created from the comment. So for example this:

will be replaced by this:

Will be replaced by this:

Here we have decided to put the body inside a new class: OrderConverter, because the convertion is a serious responsibility and the OrderService look like it’s got other things to do already (Single Responsibility Principle).

Even one-liner can be a bit fixed, for example in this part:

The comment is put, because the name of the variable does not communicate it’s intention. We can get rid of the comment if we give the necessary information to the reader in other way. For example like this:

We should eliminate every block and split every part of the code that serves a different need. Even for-each loops and try-catch expressions. For-each responsibility is to iterate over a collection, and call someone else to do the job on an element. Try-catch is responsible for handling an error, so somebody else should do the unsafe job for it.

This is the Single Responsibility Principle on a method level. Make every method have only one reason to change, and your life (and the readability of your code) will be better.

Since these are very basic and easy refactoring steps, that your IDE does automatically with little effort from you, the time burden is insignificant. You had to understand the class anyway, and on the way, you’ve made it better, easier to understand. Now the part of your class responsible for imports looks like this:

Every method has a meaningful name. No more than 7 lines of code per method. You don’t need to divide code into blocks, methods are an object oriented solution to divide the code. By the way, you’ve delegated some responsibilities to other classes. You’ve refined the code, made it more precise, more clear, more readable.

But somewhere in your head there is a voice saying: “Hey, I had just one, 30-lines method, now I have four, taking the same space. If I do it to other methods, I’m gonna have like 15 methods per class. I’ll get lost, it’s no way easier for me”.

But that is, because you have one more big mistake to fix.
The name is the responsibility

Have a look at the name of the interface: OrderService. Can you tell me what this class is responsible for? Every class should have just one responsibility, what is it for OrderService?

What kind of responsibility is “everything”? There is no such thing as “everything”? Thinking this way you can create single class named God-Emperor and end your OOP right there. You’ll never need other classes anymore.

No, my friend. The name SomethingService is a great mistake, just like a SomethingController or SomethingManager. I know quite a few SomethingManagers in real life, that you wouldn’t be able to find any responsibilities for. They are called that way, because this is what they do: NOTHING. They just are.

But we do not speak corporation-bullshit (even though some of us work at corporations), we are Agile developers, we are writers, we name things as they are.

So our OrderService interface should be split into, let’s say: OrdersImporter, OrdersExporter and OrdersReportFactory. That would make responsibilities and our intentions clear. If you do that, you end up with a WebServiceOrdersImporter implementation class, that has only 30 lines, 4 methods, only one of them public.

It doesn’t have to be expansive or difficult to make code better while you are reading it.

Take at least a small step, every time you answer is yes. Good is better than good-enough. This helps turn the tide, change the (bio)degradation into positive evolution. In the end, your code gets better with time.

No one writes good code right from the start. Good code evolves from normal code, by using the Boy Scout Rule.

And if you cannot find any way to make the code better, at least eliminate blocks of code with methods. Stick to “7 lines per method”, and “Single Responsibility of a method” rules.