33rd degree agile apache CI clojure confitura craftsmanship dostawcy english functional programming geecon gerrit git github grails groovy gwt gxt hibernate hise java JSON JUnit konferencja kotlin maven ode oracle osgi praca rekrutacja relacja REST scala servicemix sonar sonarqube Spock spring TDD testing touk warsjawa wjug ws-human-task
From the beginning of this year I got quite involved in project called Activiti. It's a "light-weight workflow and Business Process Management (BPM) Platform" (according to creators. The project is led by JBPM creators - Tom Bayens and Joram Barrez and is backed by Alfresco and several other companies. I also contributed some small features :) Activiti has already made some noise in BPM world - check this, this, or this, and of course InfoQ.
So, what's the fuss all about? What makes Activiti special? Of course - it depends what are you comparing it with. My experience involves mainly working with open source BPEL implementation, but I think some points remain valid.
So, here is my list of distinctive features: BPMN 2.0 support I took quite a lot of time for this spec to arrive, but it's finally here. The biggest step ahead comparing with BPMN 1.x is execution model - no more BPEL, you can use the same diagram for modelling and execution, and it has proper xsd schema! Of course, it won't solve all round-trip headaches, but I think it's quite important improvement. XML describing BPMN 2.0 process consists of nodes definitions and transition definitions: Activiti is one of the first BPM engines offering BPMN 2.0 support. Currently not all nodes are supported, but the list includes:                   Not all of these nodes are fully defined in spec - e.g. it does not describe how service task invocation should look like. Therefore, Activiti comes with a set of custom extensions. They are meant to be as non-intrusive as possible - to make processes more portable. One of most commonly used are ones for describing service task behaviour: Another useful extension enables to associate html form and candidate user with user task: One of nice features of BPMN 2.0 is also providing xml schema for describing process diagram - aka Diagram Interchange. This enables good engines (such as Activiti ;)) to generate process diagram just on the basis of xml definition - which makes importing processes modelled in some external tool much easier. It looks like this: Maybe not too beautiful, but usable. Goal of supporting full BPM cycle
Do you (still) believe that future tools for creating business processes will allow users to get rid of developers? I do not... Unless of course, business people will learn how to code ;) Otherwise what we'll be left with are some nice zero-coding tools which look great on 15minutes (or event 2hours if they're exprensive enough) but after running into real-life problems will demand extensive hacking.
Activiti pursues different goal, and proposes developing process cycle layer. Key points of this proposition are: So, how to achieve this? By creating another web application, of course ;) It's name is Activiti Cycle and it's meant to encourage collaboration between business, developers and operations, while allowing each of them to use their own, specific tools in their daily job. It's more like a federated repository of BPM assets, such as Visio Diagrams, BPMN process definitions, maven process projects, deployment packages and so on. These artifacts can be linked, commented and tracked by various process stakeholders and also transformed.
Easy to embed and extend, also by quasi-REST API
One of biggest pains of BPEL based solutions is that they force you to integrate with the rest of you app using webservices. Fortunately, this is no longer the case. You can embed activiti engine in your (for example) Spring application just by importing few jars and configuring it as any other Spring component:
This is of course great for running processes that handle some Java tasks. What about user tasks? Activiti comes with decent webapps for handling human tasks and monitoring process state: Activiti Explorer - screens shows the list of tasks for a given user: 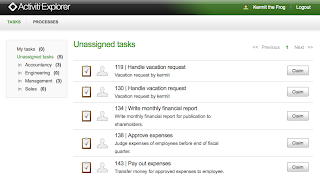 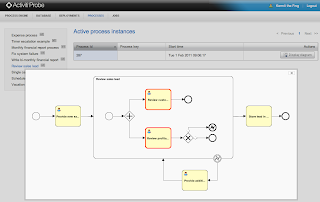 But what if you want to/have to use some other frontend technology? Webapps that I mentioned before are really thin clients - all logic is hidden behind Activiti's quasi-REST API (I use the word quasi not to be beaten by RESTafarians who will surely point out that Activiti API is just RPC over HTTP...). That means you can embed Activiti in you webapps/OSGi container/any other environment and integrate with frontend webapps using handy JSON/HTTP communication. Which looks more or less like this: Using (defacto) standards When you create application using Activiti chances are high that you know many (if not all) building blocks & techniques: Eclipse plugin includes visual modeler, which enables you to draw executable BPMN 2.0 processes, and fill all needed properties: 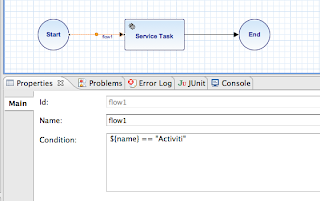 It uses Diagram Interchange format, so process diagram layout will remain the same when displaying process diagram in other applications. Testing is also pretty easy, as Activiti comes with good JUnit support. One of small, but important features is ability to simulate the clock - very handy when dealing with long running tasks. Good integration capabilities
Activiti comes with capabilities allowing for integration with three most popular open source integration frameworks: This allows to build processes that are closer to orchestration than simple workflows, containing only (or mostly) human tasks. Each of these integration frameworks comes with a vast collection of adapters using all popular (and not so popular) communication protocols. This allows process engine to concentrate on the process, and not on the communication details.
Summary I think it's quite impressive set of features for a product that is less than year old. And what are Activiti plans for the future? Tom Bayens recently announced that Activiti is going to support some sort of Adaptive Case Management - which is one of top buzzwords in process world. Other goals include: As for me, I'm finishing adding support for start timer tasks and hope to post something on Activiti-Camel intergration and running Activiti in OSGi environment soon - especially Apache Servicemix - so stay tuned. If you've found Activiti interesting, please start with 10 minutes Getting started guide, and if you know Polish, you can also have a look at my slides from Warsaw JUG presentation Thanks for reading my first post on this blog - hope you liked it.